My last blog post, "The Divisive Merger: A Powerful Tool in Texas," was named one of the Top 10 legal blog posts of last week by Texas Bar Today.  What do I win, you might ask?  This cool seal: 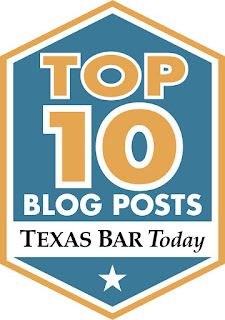 Posted by NorthTexasSECLawyer at 10:07 PM 180 comments:

The Divisive Merger: A Powerful Tool in Texas

What the heck is a divisive merger?

A divisive merger is a merger involving splitting up one company up into two or more new companies.

It's a potentially powerful tool available to Texas companies under the Texas Business Organizations Code (TBOC).  And it's a tool that is not available in most other states, including Delaware.

So why is a divisive merger so powerful?

Let's say you and another person own Texas Widgets, Inc., a Texas corporation that does business in two Texas cities - Dallas and Fort Worth.  Now say you wish to split the business in half, with one shareholder taking the Fort Worth operations (which will continue in business as Cowtown Widgets, Inc.) and the other partner taking the Dallas operations (which will continue in business as Big D Widgets, Inc.).  You'll just assign half of the company's assets to one shareholder or the other, right? But wait - what if one or more of the company's leases, permits, licenses, contracts or other instruments setting forth the company's legal rights include non-assignment provisions that prohibit the company from conveying rights from Texas Widgets to Cowtown Widgets or Big D Widgets?  Is the split-off transaction doomed without getting the consent of the company's landlord(s) or other parties?  Maybe not.  Depending upon the exact language prohibiting assignment in the contract or other document, the company may be able to enter into a divisive merger to split up the company's assets without triggering the anti-assignment provisions which would otherwise require the company to obtain another party's consent. If a company merges, technically no assignment has taken place - legally, it is as if the surviving company always owed the asset or other legal rights.

And there may be other situations where a divisive merger makes sense - perhaps where taking the time, effort, and expense of conveying individual assets might be unduly costly (such as conveying dozens of working interests in oil and gas properties in numerous counties throughout Texas). A merger might be able to immediately vest title to assets to a newly merged company as a short-cut to individually conveying a series of individual assets.

Although the divisive merger can be a valuable tool, it can also be a sword used against you by savvy operators.  So when drafting anti-assignment provisions in business contracts, you might consider if the other party might be able to use a divisive merger as an end-run to a anti-assignment provision that permits mergers but not assignments by the other party.
Posted by NorthTexasSECLawyer at 2:54 PM 6 comments: