Among the many new rules introduced by the Dodd-Frank Act of 2010, are the so-called "say-on-pay" provisions, which give shareholders of public companies the right to a non-binding advisory vote approving or disapproving of the company's executive compensation.  In connection with the say-on-pay rules, public companies are required to give their shareholders a say on the how frequently the say-on-pay votes will be held: annually, every other year, or every third year.  The say-on-pay and say-on-frequency rules have been codified by the SEC as Exchage Act Rule 14a-21(a) and Rule 14a-21(b), respectively.

We were curious how companies have reacted to the new SEC rules, so we conducted a survey of the proxy statements of the 20 largest publicly traded companies based in the Fort Worth area as reported by the Fort Worth Business Press.  Of those 20 companies, 15 have conducted say-on-frequency votes.  Of those 15 publicly traded companies, the board recommended annual say-on-pay votes in 10 cases (67%), but the shareholders voted for annual say-on-pay votes in 14 cases (93%).  In fact, only one Fort Worth-based publicy traded company in our survey had shareholders who voted for a say-on-pay vote every 3 years.  Below are graphs showing our results: 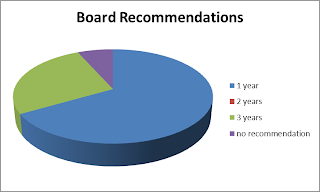 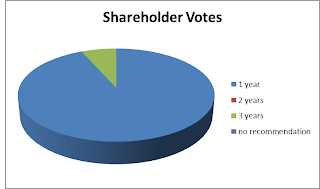 Posted by NorthTexasSECLawyer at 1:43 PM

Email ThisBlogThis!Share to TwitterShare to FacebookShare to Pinterest
Labels: Securities