Praise for "The Boom"

Last month I had the pleasure of attending an event at TCU at which Russell Gold was the keynote speaker.  The event was part of the "Leaders in Energy" speaker series sponsored by the TCU Energy Institute.  Russell Gold is the Senior Energy Editor at the Wall Street Journal and the best-selling author of "The Boom: How Fracking Ignited the American Energy Revolution and Changed the World."

I read "The Boom" recently and cannot recommend it highly enough for anyone interested in the energy industry, technology, the environment, the North Texas history and economy, or the world economy. The book explores history, technology, and personalities that have developed and exploited hydraulic fracturing (a/k/a "fracking") to change the oil and gas industry, which is in turn changing the world. Although it no doubt increases my interest in the book that some of our own clients and my own friends are mentioned and quoted in its pages, I suspect that most readers would find the material in the book interesting and well organized and presented.

It is hard to believe how much the world has changed since the first successful modern frack of a natural gas well in shale rock was conducted by Mitchell Energy on the S.H. Griffin #4 well in Ponder, Texas on June 11, 1998.

Given that generally everybody in the oil and gas business credits George P. Mitchell of Mitchell Energy with being the father of modern fracking, this blogger cannot help but wonder why more public buildings, roads or other public structures have not been named after him, especially here in Tarrant County, the heart of Barnett Shale country.

Here's a picture of Mr. Gold signing my copy of "The Boom": 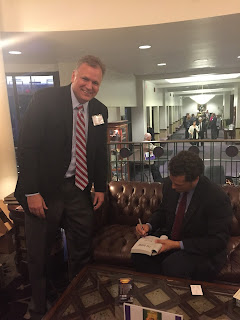 Posted by NorthTexasSECLawyer at 3:08 PM